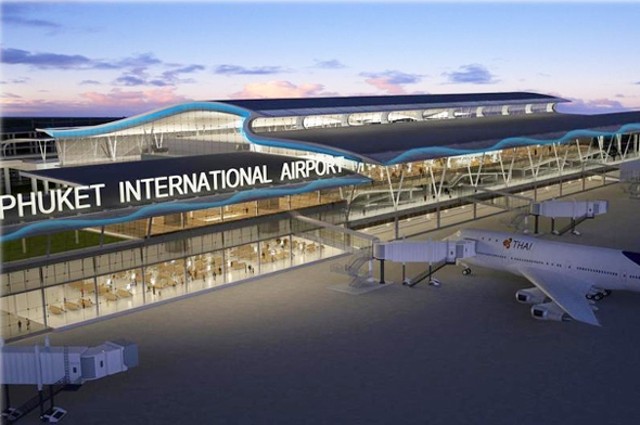 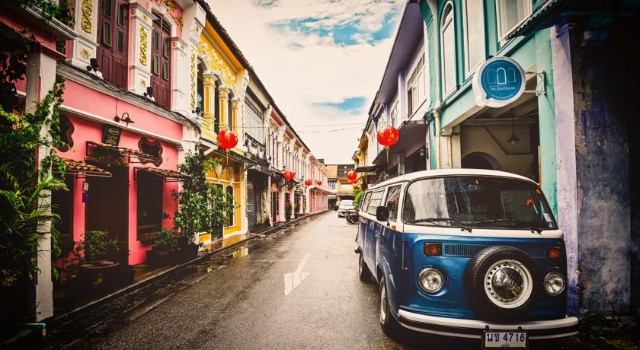 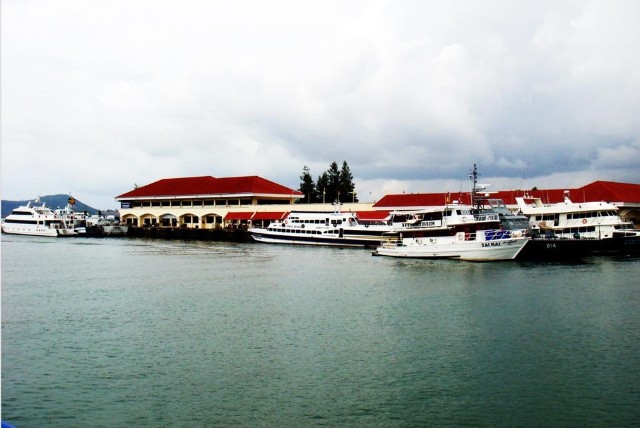 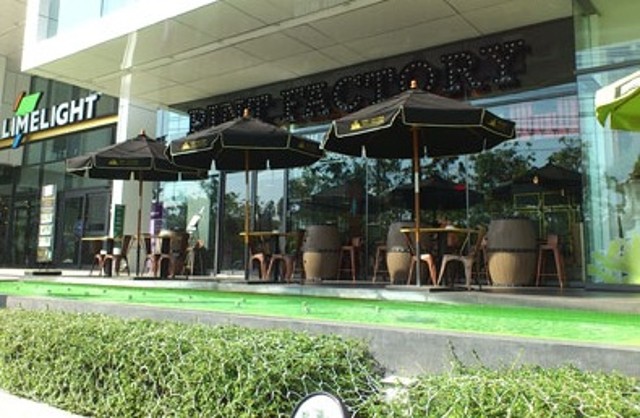 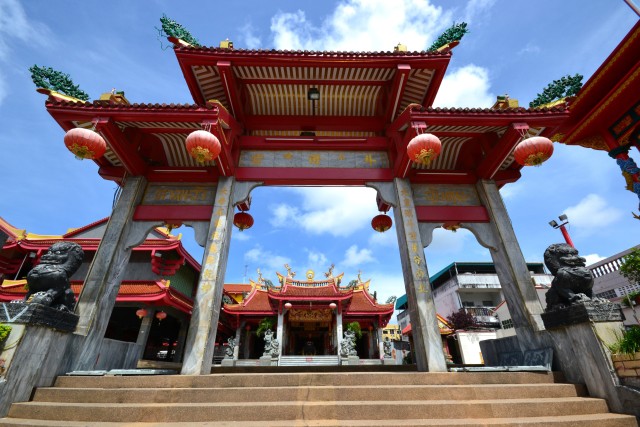 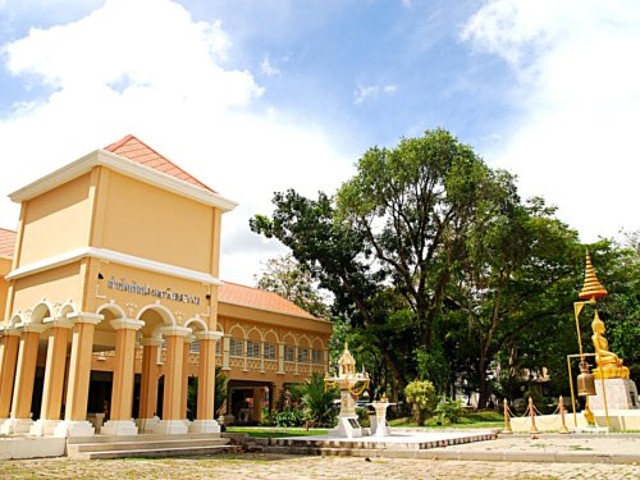 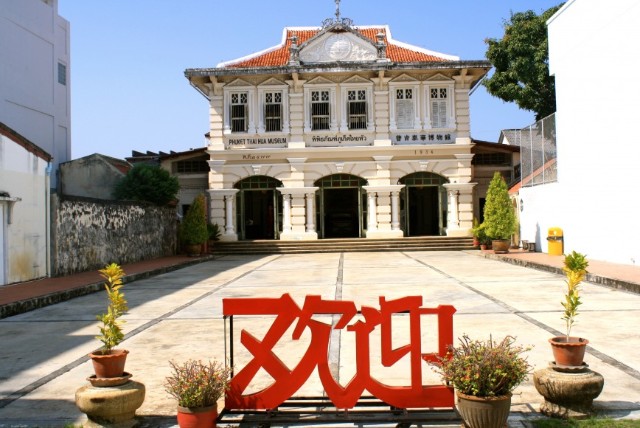 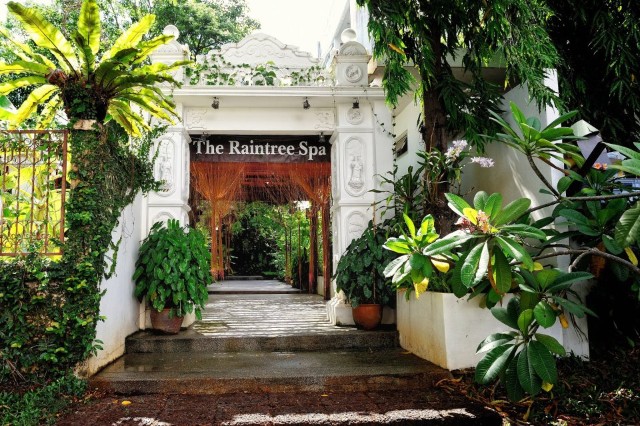 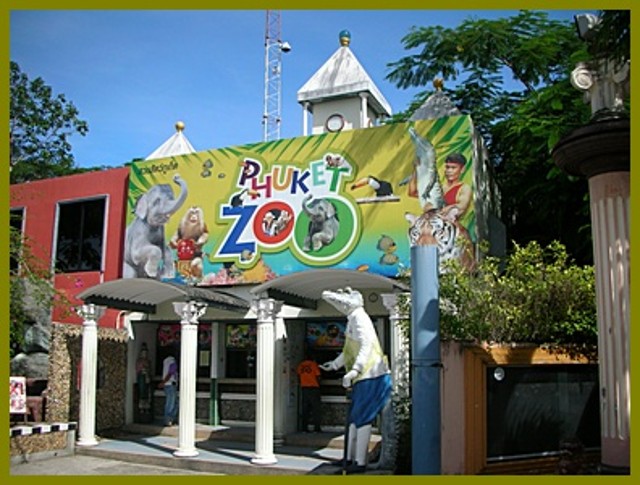 The Activity in Phuket City

The activity in Phuket City is nearly around the clock. In the early morning, stoic monks take to the streets on their daily alms rounds and the fresh market buzzes with restaurant owners buying ingredients for the day's meals.
Non-stop bustle characterizes the daytime, and lasts well into the evening. Nights are reserved for enjoying good company, whether at a restaurant, a disco, a quiet bar, or a combination of all three.
Phuket Town‘s attractions are mostly related to its colourful Chinese history and heritage, found in the Chinatown area on the north-western side of the city around Thanon Thalang.
Phuket Old Town The beginning of the tin boom in the 19th century led to construction of many fine mansions and shops that are still well preserved. The architectural style, typical of the region, is described as Sino-Portuguese and has a strongly Mediterranean character. Shops present a very narrow face onto the street but stretch back a long way. Many, especially on Dibuk Road, have old wooden doors with Chinese fretwork carving.
Other streets, forming what might be called "Old Phuket", with similar structures are Phang-nga, Yaowarat, Thalang, and Krabi, and a walking tour of the area is easy and delightful. Some other old European-style buildings of note are the Provincial Hall, the Phuket Courthouse, and Siam City Bank.
Soi Rommanee is located on Talang Road in Phuket's old Town, was a major entertainment area in the past. The style and architecture has been preserved exactly the way they were 100 year ago.

Catch a ferry from Rassada Pier to Koh Phi Phi, Rai Leh, or any of the surrounding islands taken about 15 min from the hotel. They provide 2 time a day (departure 08.30 arrival Phi Phi 10.30 and departure 13.30 arrival Phi Phi 15.30 ) with the hotel price is 400 THB per person for 1 way including pick up from hotel (have to make a reservation before)

Shopping seems to be the main reason for visitors to come to Phuket Town. In addition to local markets and a slew of malls and departments stores, Chinatown's Thanon Thalang offers a large selection of boutiques and galleries retailing traditional handicrafts as well as antiques from the region. Phuket Night Bazaar is a large area, where you can get local stuff
Shopping malls
Limelight Avenue just 1 min walk on right hand side with Limelight Avenue is the newest all-day shopping, dining and entertainment venue for locals and tourists alike in the heart of downtown Phuket. every Wen Thu Fri have a walking street they’re call “Lard Ploy Kong “ lots of handmade product delicious local foods cheap price and nice taste.
Ocean and Robinsons only 10 min walk from The Tint Robinsons is a big department store, and there is a Tops supermarket, as well as Mc D's , KFC etc.
Central Festival, Thanon Chaloem Phra Kiat - Phuket's branch of the Thai department store chain, also selling anything and everything but now in air-con comfort and a zero added to the price tag. It's still probably cheaper than the street markets at the beaches. The food section offers a large variety of western products and the fresh products seem to be of better quality than Big C or Tesco Lotus. Prices are much higher than the others though.

Jui Tui and Put Jaw Temples, corner of Thanon Ranong and Soi Phuthon (just west of the Ranong bus terminus). Put Jaw is the oldest Chinese Taoist temple in Phuket, first built over 200 years ago and dedicated to the Goddess of Mercy (Kwun Im), while the adjacent and connected.
Jui Tui is its larger, more modern annex. If you have a question that is puzzling you, ask it and throw the two red mango-shaped pieces in front of the altar in the air: if they land the same side up the answer is "no", while if they land on different sides the answer is "yes". Free entry but donations welcome.

Mongkol Nimit Temple Mongkol Nimit Temple is also known as Wat Krang, which means “Middle” as it is situated in the heart of Phuket Town. It is a Provincial Temple of Phuket located on Dibuk Road, opposite to a Shell Gasoline Station, a few meters from the crossroad with Thepkasatri Road.
Mongkol Nimit Temple is made up of a number of buildings. Monks live on site and preform rituals and can offer advice and counselling. a few of its main features are its beautiful, Gold Buddha Statue, small Bell Tower and a colonial building that is used for study and accommodation by monks. Car parking is possible within the entrance grounds of the temple

Phuket Culture Museum Phuket Cultural Museum Centre at Phuket Rajabhat University has a modest exhibition spread over three floors showcasing the life of local southern Thais as well as Phuket’s unique history and culture.
Part of the exhibition includes a simulated Thai-Chinese house, a handful of vintage tin-mining items, old ceramics from China and the Netherlands, Thai shadow puppets, as well as a model of a local sea gypsy village.
Since the centre does not have information in English, a guide might be needed. Visitors may request a free tour guide by calling in advance or emailing cul@pkru.ac.th
Opening Hours: Monday to Friday 08:30 – 16:30, closed on weekends and public holidays
Location: Inside the Phuket Rajabhat University on Thepkrasattri Road

Thaihua Museum The Thai Hua Museum features a charming inner courtyard, which is open to the sky. It is considered one of the highlights of this type of Sino-Portuguese structure as the courtyard helps air the house, especially during summertime. It also has a lovely garden that exhibits large and heavy tools and machines from Phuket’s tin-mining years.
There are more than a dozen interesting exhibition rooms and short films in Thai and Chinese with English subtitles on both floors of the museum. Overall, the Museum does well in explaining Phuket’s history through many different angles with explanations about the Phuket-China connection, Thai Hua as the first Chinese-language school in Phuket, the Sino-Portuguese buildings on the island and Phuket’s traditional ceremonies, as well as its local cuisine.

Khao Rang, A great view of Phuket Town, the southern part of the island, and some of the offshore islands, can be obtained by going to the top of Khao Rang Hill, on the town's northwest border. There are also several restaurants featuring spectacular views of the city, a health park for exercise enthusiasts, and a comfortable, expanse of grass at the top with a bronze statue of Phraya Ratsada Nupradit, the model Governor of Phuket during King Rama V's reign.

Saphan Hin,A land reclamation project provided abundant new land now used for parks and public facilities at Saphan Hin, located where Phuket Road meets the sea in Phuket Town.
In the circle is the Tin Mining Monument, shaped like a large drill bit, dedicated to the memory of Captain Edward Thomas Miles, the Australian who brought the first tin dredge to Phuket in 1909.
The monument was built in 1969 on the occasion of the 60th anniversary of tin dredging in Phuket. There is a sport center in the park.